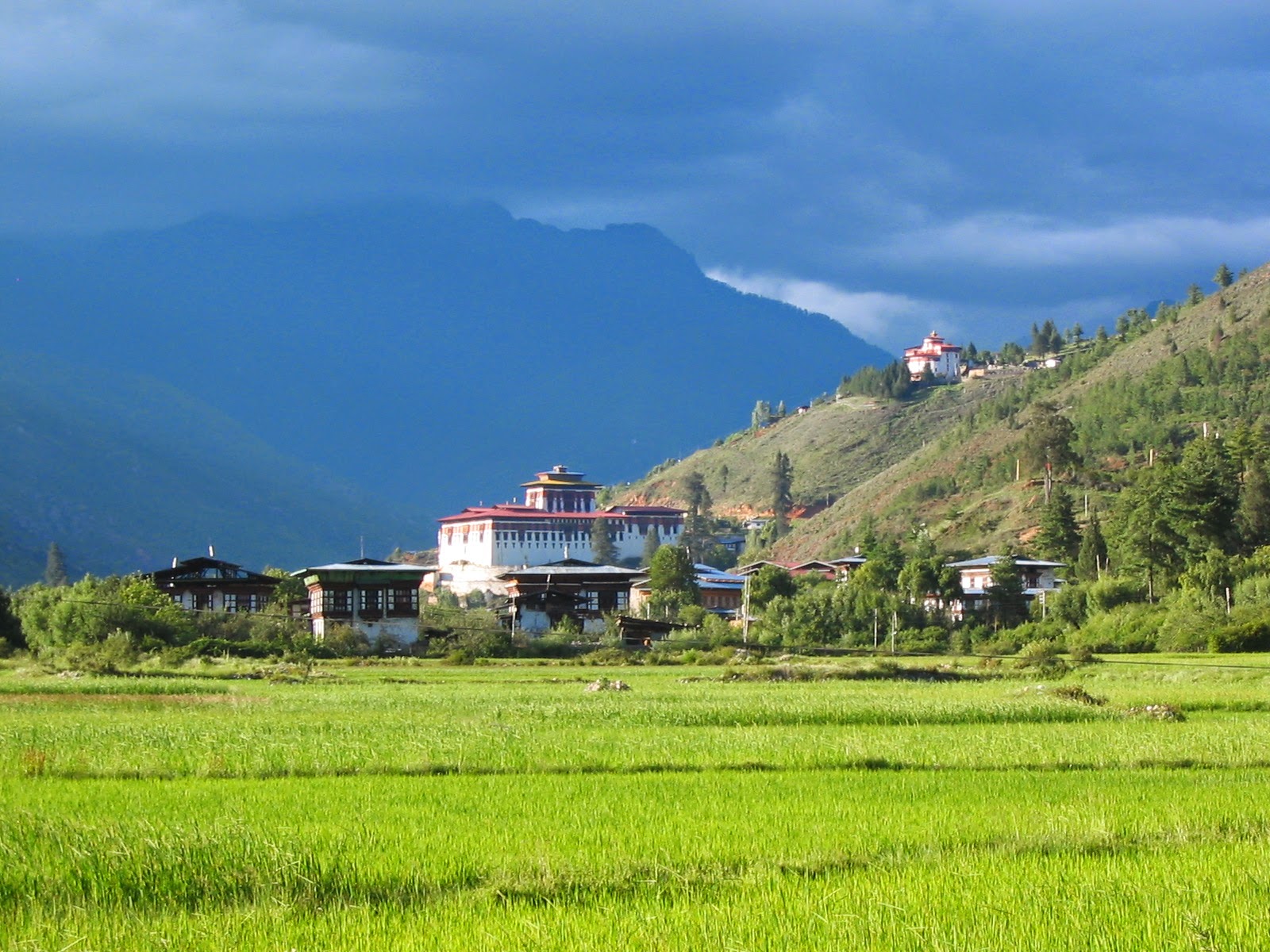 Paro is a beautiful valley which encapsulates within itself rich culture, scenic beauty and hundreds of myths and legends. Mount. Jumolhari (7,300 meters) reigns in white glory at the northern end of the valley and its glacial waters plunge through deep gorges to form the Pa Chu (Paro River). It is home to many of Bhutan's oldest temples and monasteries, the country's only airport and the National Museum. Paro has 199 Lhakhangs and 428 Chortens, the most important being Taktshang Monastery and Kyichu Lhakhang. Paro is also one of the most fertile valleys in the Kingdom, producing a bulk of the famous red rice from its terraced fields besides wheat, millet, potatoes, apple and seasonal vegetables. Most of the trade of Bhutan in olden times was conducted through Paro by way of a low pass, the Tremo La to Phari Dzong. Today, Paro is a living cultural centre. In spring, thousands of families gather at Paro to celebrate the Paro Tshechu, a four day religious festival of mask dances and folk entertainment.

Places of interest around Paro

Rinpung Dzong, also known as “fortress of the heap of jewels ", was built during the time of Shabdrung Ngawang Namgyal in 1646. It now houses the administrative offices of Paro Dzongkhag. The approach to the Dzong is through a traditional covered bridge called the Nemi Zam. A walk through the bridge to the Dzong, over a stone inlaid path, offers a good view of the architectural wonder of the Dzong as well as life around it. It is also venue of the Paro Tshechu (religious dance festival), held once a year in spring.

Ta Dzong built in 1951 was one time watch tower built to defend Rinpung Dzong during inter-valley wars of the 17th century. It was re-established as the National Museum in 1967 and has been rated among the best natural history museums in Asia. It holds fascinating collection of art, relics, religious thangkha paintings and Bhutan’s exquisite postage stamps. The museum circular shape augments its varied collection displayed over several floors. The visit will give provide an insight into the rich and unique cultural heritage and tradition of Bhutan.

Taktsang Monastery, popularly known as the Tiger’s Nest temple is the Bhutan’s most famous monastery perched on the side of a cliff 900m above the Paro valley. According to legend, Guru Padsambhava is said to have flown on the back of a tigress from Singye Dzong in Lhuntse to meditate in a cave where Taktsang Monastery now stands and hence it’s called the ‘Tigers Nest’. It was from there, he propagated the Vajrayana- Mahayana Buddhism (Larger Wheel) that was prophesied by the Buddha at the time of attaining Nirvana. This site has been recognized as a most sacred place and visited by Shabdrung Ngawang Namgyal in 1646 and now visited by all Bhutanese at least once in their lifetime. On 19 April, 1998, a fire severely damaged the main structure of building but now this Bhutanese jewel has been restored to its original splendour. The hike to reach the viewpoint to the monastery makes for a nice half-day excursion.

Drugyal Dzong which means victorious fortress was built in 1646 by Shabdrung Ngawang Namgyel to commemorate his victory over the Tibetan invaders, led by the Mongolian warlord, Gushri Khan in 1644. Strategically built over the only passage into Paro valley, the Bhutanese repelled several invading Tibetan armies during the 17th century from this location. The glory of Drukgyel Dzong remained even when it was destroyed by fire in 1951. On a clear day, one can see the commanding view of Mount Jumolhari from the village, below the Dzong.

Kyichu Lhakhang (temple) is one of the oldest and most sacred shrines of the Kingdom dating back to the 7thcentury (the other is Jambey Lhakhang in Bumthang). Kyichu Lhakhang is composed of twin temples, the first temple was built by Buddhist Tibetan King, Songtsen Gampo in the 7th century and in 1968, by Ashi Kesang Choden, the Queen Mother of Bhutan, built the second temple in same style.

Farm House: The beauty of Paro valley is embellished by clusters of quaint farmhouses. Bhutanese houses are very colourful and traditionally built without the use of a single nail. All houses follow the same architectural pattern. They are normally three storeys. The ground floor is always used for cattle while the attic is used to store hay. The families live in the middle floor. The best room is always kept for the family chapel. A visit to a farmhouse is very interesting and offers a good glimpse into the lifestyle of a farmer.

Kila Goemba is serene home of Buddhist nuns who have dedicated their life for spiritual fulfillment and leading undisturbed life of religious studies, prayer and meditation. The Goemba is nestled in a craggy patch on the mountain side below the Chelela Pass and perched precariously along the rock face. From Chelela Pass, the Lhakhang (temple) is about an hour walk amidst magnificent wooded area.