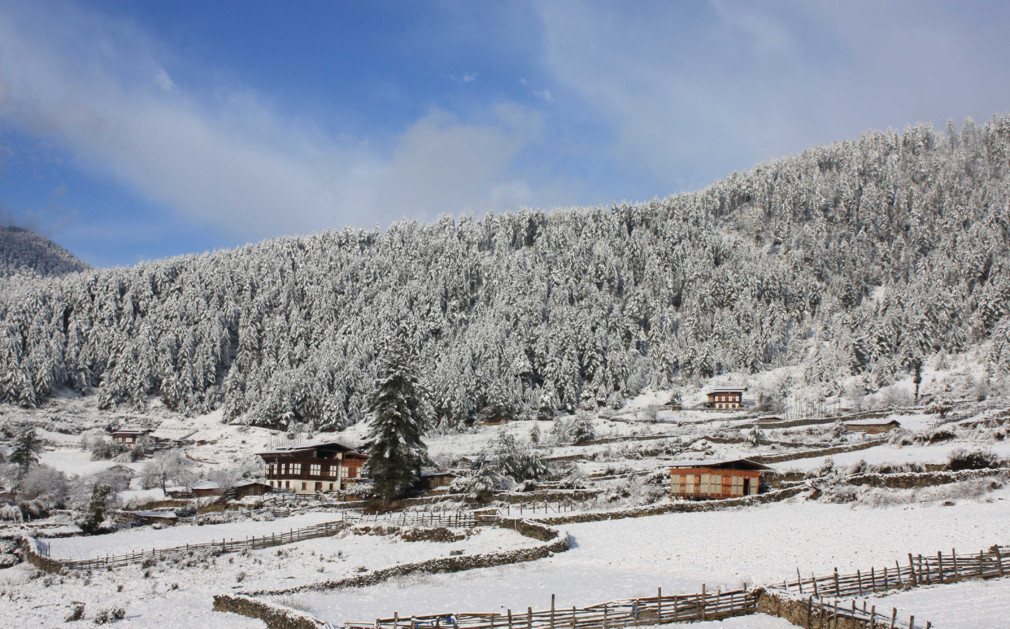 Bumthang is the general name given to the complex of four valleys-Chumey, Choekhor, Tang and Ura-with altitudes varying from 1,600 meters to 4,000 meters. Today, it is a District with its administrative headquarters at Jakar which is known for its honey production, cheese, apples and apricots. This fascinating valley is the spiritual heartland of Bhutan and home to its most ancient and precious Buddhist sites. The tales of Guru Padsambhava and his re-incarnates, known as Lingpas, still linger in most nook and corners of Bumthang that have become now sacred ground.

Places of interest around Bumthang

Jakar Dzong was founded by great grand father of Shabdrung. The Dzong was initially built as a monastery in 1549. It was upgraded after the Shabdrung had firmly established his power in 1646. The Dzong is now used as administrative centre for Bumthang valley and houses the regional monk body.

Jambey Lhakhang (temple) was built in 7th century by Tibetan King, Songtsen Gembo, believed to be the reincarnation of the Buddha of Compassion. It is one of the 108 monasteries built by him to subdue evil spirits in the Himalayan region.

Kurjey Lhakhang (temple) which is located above Jambey Lhakhang, consists of three temples. The one on the right was built in 1652 on the rock face where Guru meditated in the 8th century. Second temple is built on the site of a cave containing a rock with the imprint of Guru's body and is therefore considered the most holy. The third temple was recently built by the present Royal Queen Mother. These three temples are surrounded by 108 Chorten wall.

Tamshing Lhakhang (temple) located opposite Kurje Lhakhang on the other side of the river was founded in 1501 by Terton Pema Lingpa, the re-incarnation of Guru Padmasambhava. The Lhakhang has very ancient religious paintings like 1,000 Buddhas and 21 Taras (female form of Bodhisattva). The temple was restored at the end of the 19th century.

Mebar Tsho is one of the sacred pilgrimage sites of Bhutan where Pema Lingpa found the treasures hidden by Guru Padsambhava and thus became a terton, a 'discoverer of religious treasures'. The importance of this site is indicated by the extensive array of prayer flags and the small clay offering called ‘tse tsa’ in rock niches.

Tangbi Goemba which is a half an hour walk north of Kurjey Lhahang was founded in 1470 by Shamar Rinpoche of the Kargyupa religious school. The temple has two sanctuaries and a temple of terrifying deities. The sanctuary on the ground floor contains statues of past, present and future Buddha and three clay statues probably dating end of the 15th century. On the upper floor, the vestibule contains two remarkable paintings of Guru Rinpoche’s heaven and the Buddha Amitabh’s heaven.

Ngang Lhakhang which is a few hours walk from the Tangbi Goemba is the small region of Ngang Yul (Swan Land) and this temple here is 100 m above the valley floor. The site was visited by Guru Rinpoche and present temple was built in the 15th century by Lama Namkha Samdup, a contemporary of Pema Lingpa. A three days festival is held here each winter with masked dances in honor of the founder of the temple.

Ura Valley which is about one and a half hour drive from Jakar is the highest of Bumthang’s valleys and it is believed by some to have been the home of the earliest inhabitants of Bhutan. To reach here, the road climbs to amazingly open countryside, only occasionally running into forest. Large sheep pastures line the road up to 20 km behind the southern tip of the Tang valley. The route crosses Ura la pass (3,600m) with a magnificent view of Mount. Gangkhar Puensum. Villages in Ura have clustered houses, which is quite unusual in Bhutan. Above Ura village (3,100m) is a new temple dedicated to Guru Rinpoche. Inaugurated in 1986, it contains a huge statue of the master and remarkable paintings of the cycle of his teachings. Since last 25 years Ura has been transformed from a marginal community to a prosperous valley.