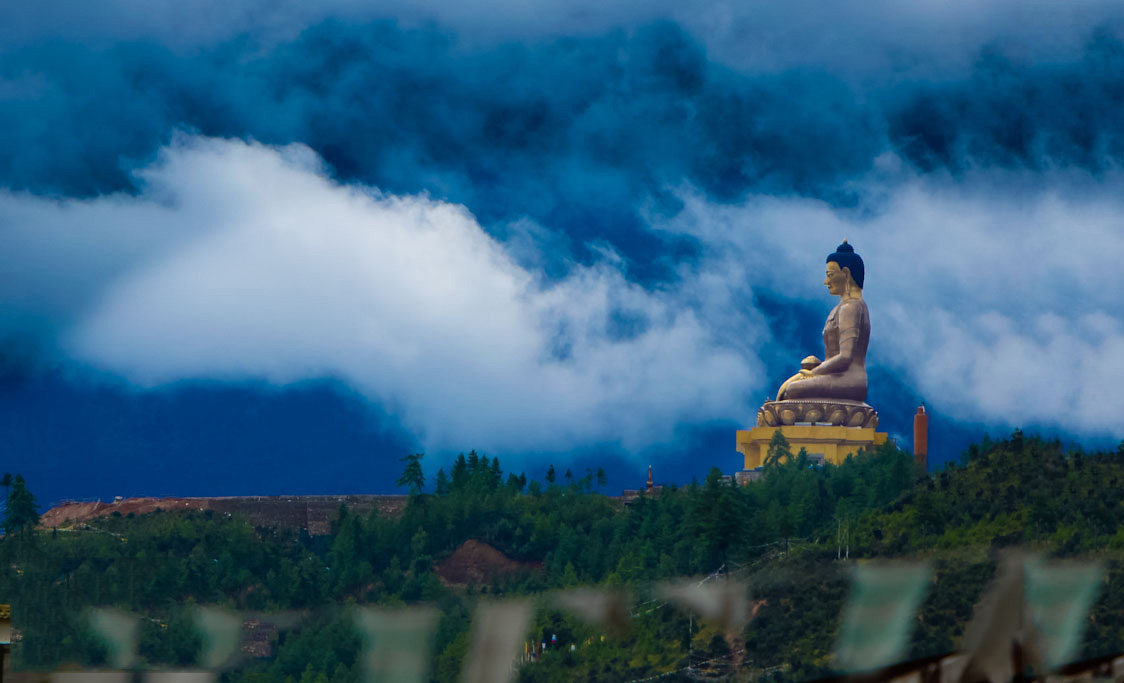 Thimphu has been the capital of Bhutan since 1955. It is the centre of government, religion and commerce. The harmonious mix of modern development with ancient traditions makes it a unique town. It is homes to the civil servants, expatriates and the monk body and maintains a strong national character in its architectural style. Once a small rural settlement, today it is home to about 100,000 people.

Places of interest around Thimphu

Tashichhodzong or the “fortress of the glorious religion", was initially erected in 1641 and rebuilt by the Third King Jigme Dorji Wangchuck in 1965. Tashichhodzong is Bhutan’s administrative and religious centre and houses the throne room of His Majesty the King of Bhutan, Government Ministries, the nation’s largest monastery and headquarters of His Holiness the Je Khenpo (Head of the Monastic Body or Chief Abbott) and the monk body. The National Assembly Hall is located in a new building across the river.

National Memorial Chorten (Stupa) was built in 1974 in memory of the Third King of Bhutan, His Majesty Jigme Dorji Wangchuck. It is monument for world peace and prosperity. The paintings and statues inside the monument provide a deep insight into Buddhist philosophy.

National Library, which holds a vast collection of Buddhist texts and manuscripts, some dating back several hundred years, as well as modern academic books mainly on Himalayan culture and religion; the history of Bhutan lies imprinted in archaic texts which are preserved at the National Library. Besides thousands of manuscripts and ancient texts, the library also has modern academic books and printing blocks for prayer flags.

Semtokha Dzong which stands on a lofty ridge, five miles from Thimphu town was built in 1627 by Shabdrung Ngawang Namgyal. It is the oldest Dzong in the country and now houses the School for Buddhist Studies.

National Institute for Zorig Chusum or the School of Arts and Crafts is an Institute where students undertake a six-year course on the 13 traditional arts and crafts of Bhutan. “Zorig Chusum” means the Thirteen Arts and Crafts. To preserve the country’s invaluable heritage and promote arts in Bhutan, the government initiated this institute in 1971. Students are taught painting, calligraphy, embroidery, wood carving, and sculpture. They also learn the traditional meaning and spiritual values enshrined in Buddhist art. On a visit one can actually see students at work. The students follow a comprehensive course that starts with drawing and progresses through painting, wood carving, embroidery, and statue- making. This institute not only helps preserve our beautiful heritage but also equips future generations with skills and knowledge to keep our own heritage alive. The 13 arts and crafts comprise of; painting, carpentry, carving, sculpture, casting, blacksmithing, bamboo work, gold and silversmith, weaving, embroidery, masonry, leather work, and paper making.

Changangkha Lhakhang, a fortress like temple lies perched on a ridge above Thimphu, south of Motithang. The temple was built in 12th century on a site chosen by Lama Phajo Drugom Shigpo, who came from Tibet. The central statue here is Chenrezig in a manifestation with 11 heads. From temple courtyard, there is fascinating view of the Thimphu valley.

Handicrafts Emporium, a government-run enterprise where one can find a wide range of beautifully hand-woven textiles and craft products. It also carries a small collection of books on Bhutan, Buddhism and Himalayan culture.

Local Vegetable Market, every Saturday and Sunday most of the Thimphu's scant population and many valley duelers congregate on the banks of the river where the weekend market is held. It provides an insight into the village economy where farmers from nearby areas converge to sell their products. It makes an interesting for an opportunity to mix with the local people.

National Textile Museum: With the opening of the Textile Museum in 2001, under the patronage the Queen of Bhutan, Her Majesty Ashi Sangay Choden Wangchuk, Bhutanese textiles have reached new heights as one of the most visible traditional crafts and as a distinctly Bhutanese art form. The textile museum has opened its exhibition on six major themes: warp pattern weaves, weft pattern weaves, role of textiles in religion, achievements in textile arts, textiles from indigenous fibres and the royal collection. The Crowns of Bhutan’s Kings, namzas (dresses), the first version of the Raven Crown and other accessories used by members of the royal family can be found in the museum. The goal of the museum is to slowly become a center for textile studies that will carry out documentation, research and studies on textiles.

Folk Heritage Museum also known as Phelchey Toenkhyim was also established at the initiative of the Queen of Bhutan, Her Majesty Ashi Dorji Wangmo Wangchuck is dedicated to connect people to the Bhutanese rural past through exhibits, demonstration, educational programs, and documentation of rural life. The principal exhibit in the museum is a restored three- storey traditional building rammed with mud and timber, which dates back to mid 19th century. In order to present a typical Bhutanese rural setting and flavour, paddy, wheat and millet fields; a traditional watermill (with mill stones that date back more than 150 years), traditional style kitchen gardens with vegetables that were grown and consumed over hundred years, and the famous traditional hot stone bath complement the museum building and the exhibitions within. It provides fascinating insights into Bhutanese tradition and way of life reflecting Kingdom’s rich cultural heritage.

Tango Goemba (monastery) is half an hour drive from Thimphu town. It was founded by Lama Gyalwa Lhanangpa in the 12th century and the present building was built in the 15th century by the ‘Divine Madman’, Lama Drukpa Kunley. In 1616 Shabdrung Ngawang Namgyal visited Tango and meditated in a cave near the monastery. His meditation helped ensure the defeat of an invading Tibetan army. The head Lama, a descendent of Lama Drukpa Kunley presented the Goemba to Shabdrung, who carved a sandalwood statue of Chenrezig which he installed in the monastery. The picturesque three-storey tower and several surrounding buildings were built in the 18th century by the eighth Desi, Druk Rabgye and Shabdrung Jigme Chhogyel added the golden roof in the 19th century.

Cheri Goemba (monastery) is half an hour drive from Thimphu town. It was built by Shabdrung Ngawang Namgyal in 1620. A silver chorten inside the monastery holds the ashes of Shabdrung’s father. The trail commences by crossing a lovely covered bridge that spans the Thimphu Chug, then climbs steeply to the monastery.

Phajoding Goemba (monastery) is a 5 km uphill walk from Motithang. The monastery was built in 15th century by Shagcha Rinchen who introduced the Drukpa Kagyupa school in Bhutan in the 13th Century. It was at one time one of the richest monasteries in the country.