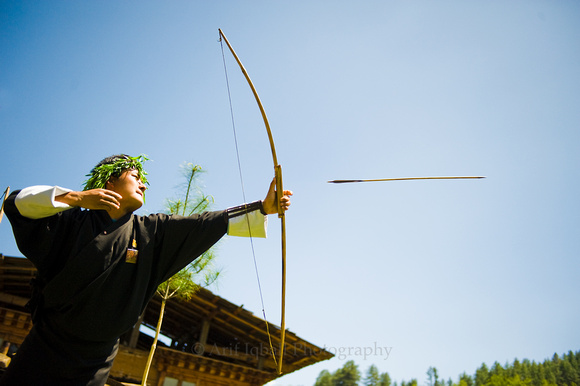 Traditional sports and games form a crucial part of Bhutanese national culture. The people of Bhutan are sports lovers. Traditional games and sports as Degor (Discus), Pungdo (Shot put), Khuru (Dart), Soksum (Javeline), Keshi (Wrestling) form an integral part of Bhutanese life. Modern sports such as Football, Golf, Tennis, Basketball, Boxing, Shooting, Table Tennis, Badminton, Volleyball and Martial Arts, are encouraged along with safeguarding the old ones. Representatives of the country participate regularly in South Asian Federation (SAF) and the Olympic games. Archery, the national sport, remains the favourite sport and absorbing pastime both for the young and old alike. What perhaps started as an equipment to threaten enemies in the ancient times, archery now is a great competitive and recreational sport in Bhutan. Today traditional annual archery contests are held throughout the country. These contests are important both as reaffirmation of traditional culture and also as popular amusement. The tournament begins with initiation ceremonies and traditional breakfast. The targets are placed at 140 meters apart and because of this great distance the team members gather dangerously close to the target, the archer’s team mates perform a celebratory slow-motion dance sing praises of the shooter who tucks a coloured scarf into belt. Women decked out in their finest clothes are cheer leaders for the opposing teams at major tournaments. They dance and sing between play, and during the shooting they perform brief routines. No major national or local holiday or festive occasion is complete without an archery game. Archery is considered to be an art, mastered to attain physical dexterity, mental strength and above all, the highest spirit of competition. Modern sports The international sports, such as soccer, basketball, volleyball, tennis, and table tennis are becoming popular. Modern sports are rapidly gaining popularity in Bhutan. The country has been sending competitors to the Olympics and the Asian Games ever since Bhutan joined the international Olympic Committee and the Olympic Council of Asia. Some of the popular sports are; Athletics, Archery, Basketball, Badminton, Boxing, Football, Table Tennis, Taekwondo, Tennis, Volleyball and Golf.